Draw something on the screen... and interact with it!

Summary of the previous episodes: 10 days ago Richard Jones complained about the difficulties to achieve simple tasks (drawing a function graph on the screen) on modern computers with modern programming languages; the day after Erik de Castro Lopo replied with a post in which he used GTK and Cairo (better: the OCaml bindings) to achieve the result to draw a simple function on the screen. Yesterday Matias Giovannini added some pepper to this argument using SDL to draw the Newton fractal.

So, what can be added to all this? With a perfect graphic toy you can draw on a window with simple commands, of course, but you also want to interact with the objects you drew. So I elaborated Erik example to add some keyboard and mouse interaction with the graphics on the screen.

First of all, download the source code or, if you want the latest version, clone my GIT repository:

To compile the program you need:

All these packages are available in any recent Linux distribution; on Debian/Ubuntu:

To compile instruct this command inside the program directory:

The program is very simple and is essentially derived from Erik's code: the core is the functor Toy_maker.Make which accepts, as input, a module with the following signature INTERACTOR:

In this module the user must provide a type state, which contains the application state, some initialization values, a command line handler (in case you need) and 4 event handlers for the following events:

The user also provides a repaint function, which takes care of repainting the Cairo context.

As a demo I wrote a simple My_interactor module implementing the following simple features:

Here is the result. 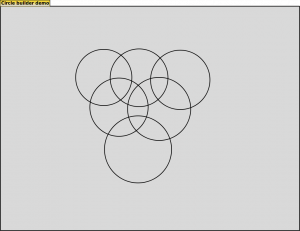 Yes, it's somewhat dull, but it does its job. Have fun!

Next week I’ll be away on holiday, finally! It’s only one week, but better than nothing. I’ll be back on line Monday the 14th of July.

Valid XHTML 1.1. This blog is written in Objective Caml. Design based on the work of Rodrigo Galindez.